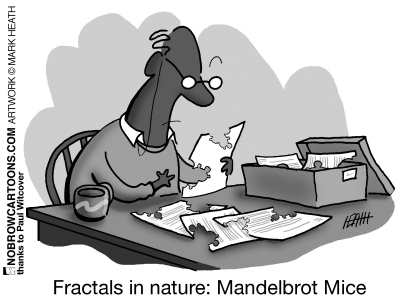 I got the idea for this cartoon by stealing it. I try not to steal, at least this blatantly, but I was reading — not stealing — Paul Witcover’s post on the Inferior 4+1 blog — and I’ll confess that I was ready to be inspired, but no more than usual, just the default setting of any artist — when out of the blue, like a trap set for starving cartoonists who are always hungry for puns and punchlines — Paul Witcover described old papers as being damaged by Mandelbrot Mice.

Punchlines lead to punchlines. Again and again, top to bottom to top.

*It ran at American Scientist Online, but gratis. If you’re reading this, Paul, you’re 30% is in the mail.

I'm a freelance cartoonist. My work has appeared in Reader's Digest, Harvard Business Review, American Scientist, Woman's World, and others. I'm also the creator of Spot the Frog, a comic strip you can find at Gocomics.com. View all posts by Mark Heath