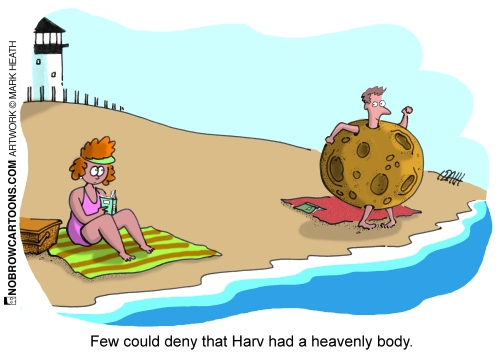 This is an old one. It had a different caption when I first wrote it. I’d seen the moon referred to as a lesser body, so I wrote, “Harv loved to show off his lesser body.” I could rewrite it again as, “Few could deny that Harv had a lesser body.” One of my trials as a cartoonist and perfectionist — as in, always tweaking, not necessarily improving — is deciding on the final caption.

I'm a freelance cartoonist. My work has appeared in Reader's Digest, Harvard Business Review, American Scientist, Woman's World, and others. I'm also the creator of Spot the Frog, a comic strip you can find at Gocomics.com. View all posts by Mark Heath